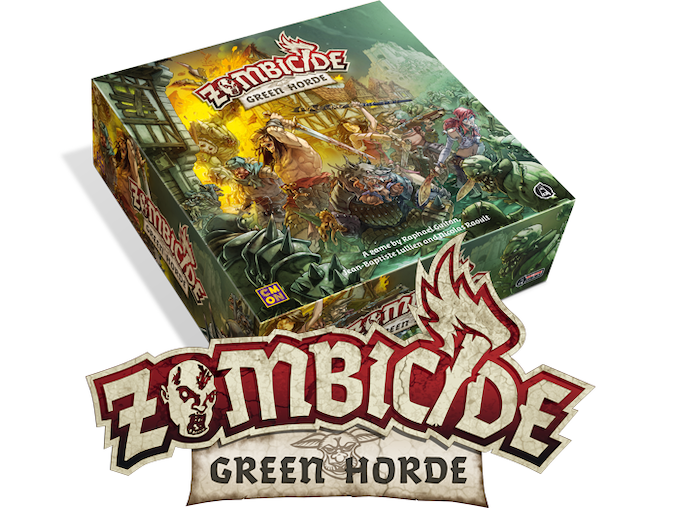 Zombicide: Green Horde is the standalone sequel to Zombicide: Black Plague. Set in the same medieval era, players will take on the role of Survivors looking to defeat the shuffling, undead menace by any means possible.

Strap on your armor, sharpen your sword, and prepare for adventure for the Feral Dragon is coming!

Dragon Bile had to come from somewhere, right? The Feral Dragon is a Kickstarter Exclusive expansion that all backers will receive. It adds a massive foe which will shake your game experience to its foundation! Spawned similarly to an Abomination, the Feral Dragon enters the game by stomping the central Zone of its tile, reducing any building there to a pile of rubble, and scattering or killing any being unfortunate enough to be there.

Towering above everything else, the Feral Dragon sees all, showering the nearby Zone with the most Survivors with its deadly dragon breath, or flying to the next adjacent tile to further smash the village and chase its prey. Bringing down the Feral Dragon will certainly not be easy. Each time it lands it features a vulnerability to only a specific weapon type, and damaging it only makes it fly away, waiting to dive into the village again when a new Spawn card is drawn. Only once all of its 8 Vulnerability cards have been used, the Feral Dragon is finally eliminated for good from the game (its Spawn cards now bringing some respite to Survivors).

To help Survivors in their quest to bring down the Feral Dragon, this pack comes with a new Siege Engine: a Ballista, including its awesome miniature. Lighter than the Trebuchet, the Ballista can be moved or fired by spending only 2 actions. The Ballista's piercing bolt is able to target several Zones in a straight line, wiping out loads of enemies.