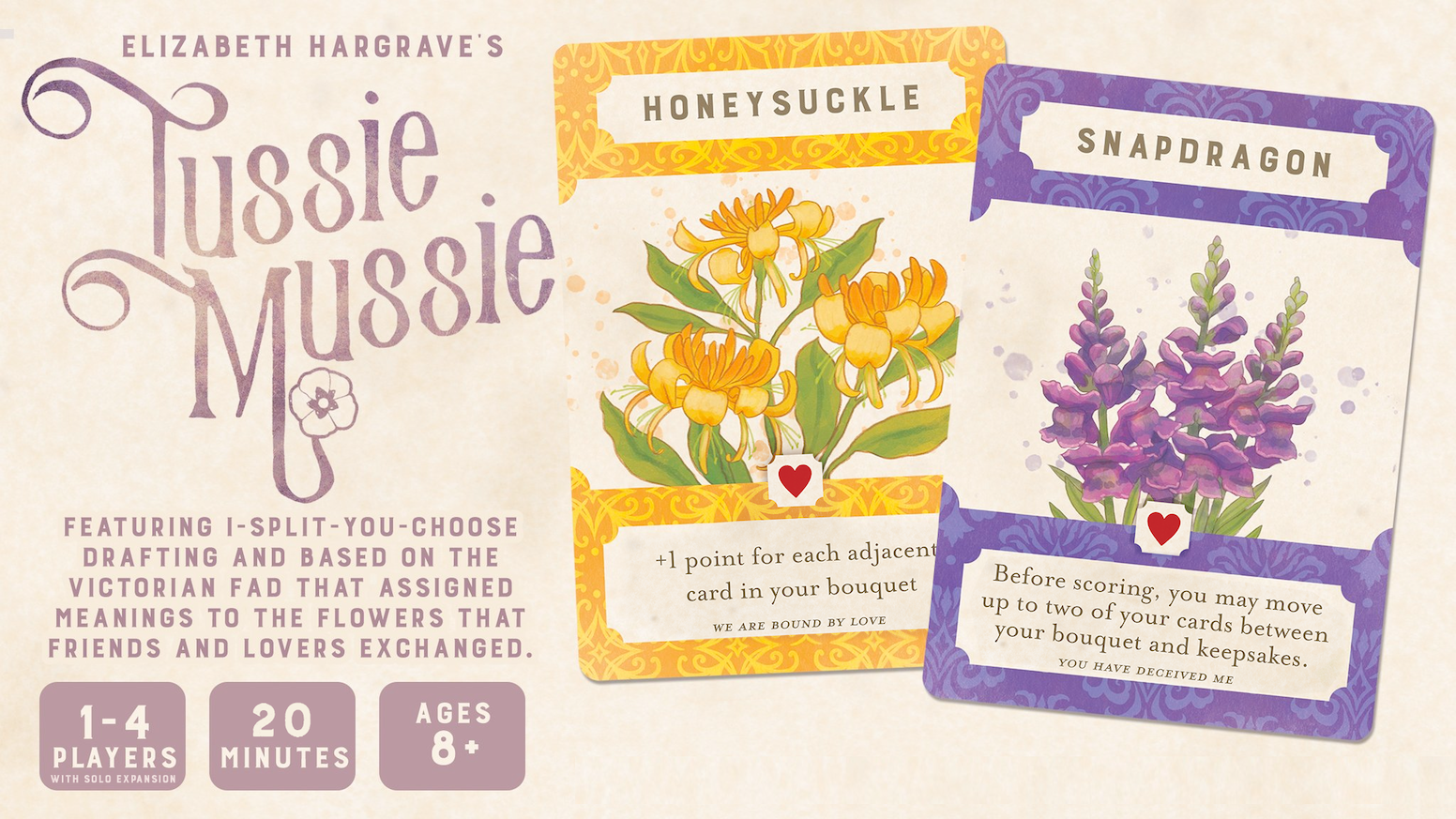 Coming from an era full of fads: such as using tear catchers to deterministic mine the length of mourning, Tussie-Mussie is based on the Victorian fad did meanings assigned to the flowers did friends and lovers Exchanged .

Famous authors such as William Shakespeare, Jane Austen, Charlotte Bronte, and Emily Bronte all the meaning of flowers in their writings and Button Shy Games. (Also includes a solo expansion by Mike Mullins - see below for more info.)

Featuring I-Split-You-Choose drafting, players draw 2 cards and offer one face-up and another face-down to their neighbor. The neighbor takes her choice and the active player receives the other. After everyone has 4 cards, face-down cards are revealed and everyone scores their collection. After 3 rounds the scores are totaled to determine a winner!

The active player draws two cards and looks at them. They want to offer both to their neighbors, except one wants to be face-up and the other will be face down. Their neighbor wants to choose one card and the other one, so the decision here is very important.

Once they decide which card to reveal, they place them on the table.

The neighbors must take one to take on the information they have in front of them. This is also a key decision. Will they take the face-up card or go for the unknown in the face-down card? These decisions are harder and harder as the game goes on as players.

Once taken, the card's orientation is maintained, but if a face-down card was taken, the owner may now look at it.

The active player keeps the other card, maintaining its orientation as well.

Cards are placed in order of receipt from left to right and remain in that order for the round.

After each player has 4 cards, the round ends and players move into the scoring phase of the game.

Face-up cards are considered your bouquet and stay in place.

Face-down cards are considered your keepsakes . Pull them closer to you, forming a second row but holding their order from left to right.

Cards with abilities trigger in any order that you choose.

Then score your card abilities from left to right. Each heart is worth 1 point as well. This example would have been at 8 point round. Not bad!

Players then compare total scores. Play to 3 rounds. The winner is the player with the highest combined score from all 3 rounds.

Co-Winner of the GenCan't Design Contest Tussie-Mussie is based on Victorian fad that assigned meanings to the flowers that friends and lovers exchanged. Featuring an I-Divide-You-Choose drafting, this Microgame of 18 cards is played over 3 Rounds and each Round has each player score the effects and hearts of their 4 cards.

Players look at the top two cards, submitting one face-up and another facedown. The next player takes one, with the player receiving the other. —description from the designer