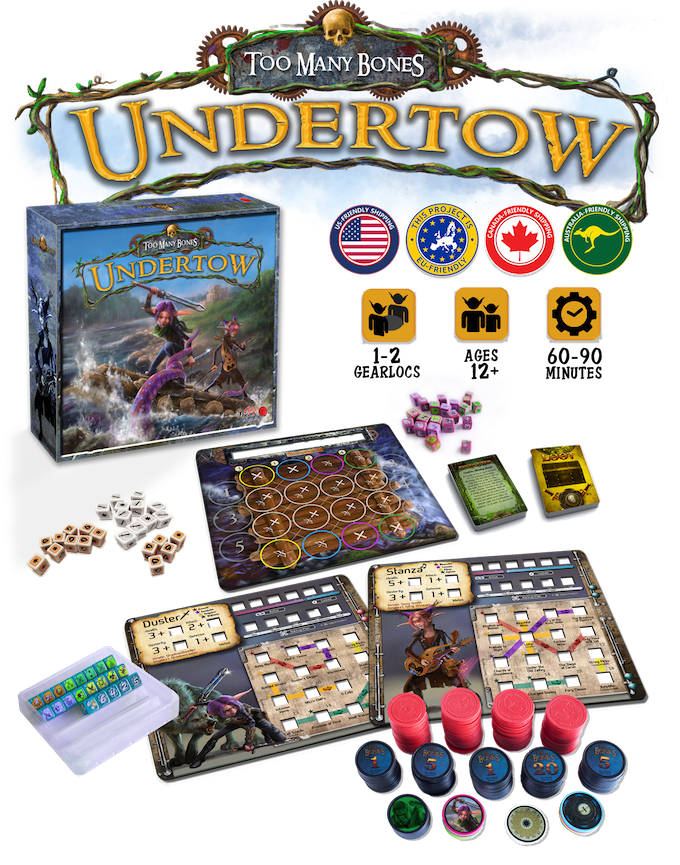 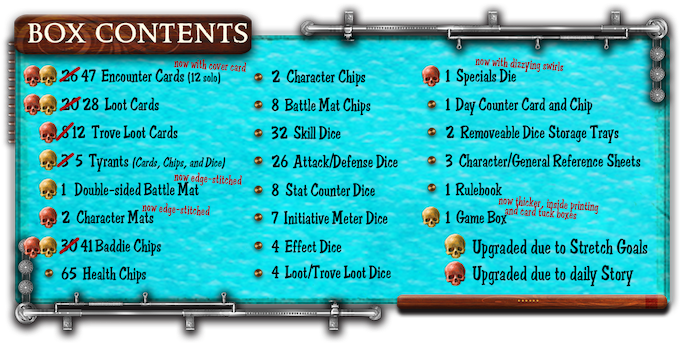 “Each character is so unique, I can’t get enough of these characters. It’s one of the coolest games I’ve played in a long time." Matt Evans - Board Game Replay

"To come back to this week after week would be a lot of fun. There's nothing out there like it." David and Jeremy – Man vs Meeple

"This is a very high recommendation from me. I'm very, very impressed with this game." Tom Vasel - The Dice Tower

"This game is ingenious. Chip Theory Games really has done something very, very special. This right here could easily be my game of the year." Robert Oren - The Dice Tower

Welcome to Too Many Bones: Undertow

Whether you're brand new to the Too Many Bones series or a Gearloc in the flesh, Undertow will fit you perfectly.

Undertow is a standalone sequel and expansion to Chip Theory Games' wildly successful dice-builder RPG, Too Many Bones (TMB). This 1-2 player (4-player capable) cooperative experience is built to challenge and surprise you at every turn through unique encounters, brain-bending battles, endless character customization, clever mini-games, tactical decision making, and of course the industry-best components we're known for.

We've designed Undertow to be an easy entry point into the TMB universe. Fully playable as a 1-2 player game out of the box, Undertow will allow you to see what the hype surrounding TMB is all about without breaking your bank account. The game comes with two playable Gearlocs (Duster and Stanza), 36 completely new Encounters, 30 Baddies (to fight, flummox and fluster you during your journey), and 3 Tyrants (final bosses) to attempt to take down. If we see similar success to the original TMB during this campaign, you can expect these content and component numbers to grow even larger!

Featuring the same heavy duty chips, waterproof PVC cards and reference sheets, and die-cut neoprene mats as the original, Undertow will be the crown jewel of your board game collection, both in gameplay and component excellence!

What's the best way to build my character? What's the best course of action during this battle? Which of my unique skills are best in this situation? All of these are tried and true RPG questions. We've taken the answers to all of these questions and enhanced them with dice. Beautiful, custom dice. And lots of them!

In Too Many Bones: Undertow, anytime you're successful in your day's challenge, odds are you'll be unlocking Skill Points. How you use these Skill Points is up to you, but it will always involve dice. These dice are accumulated and used in many different ways (hence the "dice-builder" association), all of which are extremely tactical! Yep, we said "dice" and "tactical" in the same sentence. No joke. You'll have many ways to mitigate and work with or around your rolls. It will take practice to perfect these Gearlocs, as each one is incredibly different from the next! Assign your Skill Points wisely!

Made your decision? Now it's your turn in battle. Within the parameters of your Stats, you'll now build your roll. Make sure to take into account positioning, unique Baddie Skills, and the dice you've unlocked to unleash the optimal combo of Skills, attack and defense. Choose carefully; your dice choices can make or "Break" (ugh...golems...) your battle outcome!

Don't Get Pulled Under! (TMB Lore)

It's been almost six months since the Gearloc Council commissioned a band of their own kind to infiltrate and eliminate seven Tyrants with strongholds in northern Daelore. Our party of Gearlocs has taken multiple journeys into those harsh lands, and many Tyrants have been vanquished by their hands. But something doesn't feel quite right, and slowly, our heroes are realizing the problems in this land run deeper than anyone could have imagined.

Duster, seemingly a traitor mere weeks ago, tried to warn her fellow Gearlocs on multiple occasions of the evil lurking inside the walls of the Gearloc Council Chambers. She was even willing to go rogue to prove it. This has all lead to a climactic battle with her peers, bringing Gearlocs on both sides to knife point!

But there are gaps in this story! What happened next!? Where is the rest of the gearloc party? Why is Duster imprisoned in Obendar? Who is Stanza anyway? And what part does the Sibron River play in all this? All will be revealed soon...

So how does gameplay in the Too Many Bones universe work? We've built a fairly simple framework that allows for an incredible amount of possibilities and combinations when you factor in the day count, the number of Gearlocs you are playing with, and your randomly drawn Baddies and Encounters. A quick explanation might go something like this:

Keeping the overall system simple allows you to focus on the many unique skills of your characters and the fun and challenge of your battles!

For an overview of the many mechanics of Too Many Bones, check out some of the playthroughs below!

Well...everything! Of course, Undertow is built on the same fantastic engine as the original. However, you'll get more of everything. 100% new Baddies, 100% new Tyrants, 100% new Encounters, and 2 brand new Gearlocs, each with 16 brand new Skills and strategies.

Also, we've incorporated a new two-sided Battle Mat to add additional variety and theme to the game. The Gearlocs are no longer land loc'd...but neither are the Krelln! Encounters will now call for either side of the Battle Mat, requiring new strategies to protect your raft from damage and a variety of other surprises with the new positions along the side of the battlefield.

Another exciting element to Undertow is our built-in campaign mode. This allows you to play one adventure if you like, but instead of resetting everything, you will have some choices to make in order to continue on with the next phase of your adventure (up to three)!

Join new playable Gearloc characters Stanza and Duster as they journey down the Sibron River in search of answers in this standalone expansion/sequel to Too Many Bones!

Too Many Bones: Undertow allows for 1-2 players out of the box, but by bringing in additional Gearlocs from the original game or adding in characters like Ghillie, Nugget, and Tink, you can create an adventure for up to four players. Undertow features all new baddies, encounters, tyrants, and a double-sided battle mat. Battles take place both on land and on your raft, adding even more variety and brain-bending tactics.