Greed, Pride, Gluttony, Wrath, Lust, Sloth, and Envy—the  infamous “Seven Deadly Sins.” For the faithful, they instill horror. For you, on the other hand, they present a wonderful business opportunity!

In The Road to Canterbury, you play the role of a medieval pardoner who travels the road to Canterbury tempting Pilgrims with the Seven Deadly  Sins—and then pardons these sins for a fee! Each sin with which a player tempts a Pilgrim increases the amount of money that will be paid when  that sin is pardoned, but also brings Death one step closer, which threatens to kill off your customers! (These are “deadly sins” after all.)

Players also make use of fake holy relics to perform special actions. Bonuses are awarded to players who corrupt each Pilgrim the most while traveling the road to Canterbury. Players also score a bonus from the Pardoner’s Guild for being the first to tempt Pilgrims to commit each one of the Seven Deadly Sins. Players are further rewarded for performing Last Rites for Pilgrims as they pass away. When the Pilgrims finally reach Canterbury at the end of the game, players receive bonuses from the Companies of Pilgrims for which they have pardoned the most sins, plus a bonus from Canterbury to the most forgiving pardoner along the road.

The player who makes the most money as an unscrupulous pardoner wins the game!

Greed, Pride, Gluttony, Wrath, Luxury, Idleness, and Envy – the infamous "Seven Deadly Sins". For the faithful, they instill horror. For you, on the other hand, they present a wonderful business opportunity!

In The Road to Canterbury, you play a medieval pardoner who sells certificates delivering sinners from the eternal penalties brought on by these Seven Deadly Sins. You make your money by peddling these counterfeit pardons to Pilgrims traveling the road to Canterbury. Perhaps you can persuade the Knight that his pride must be forgiven? Surely the Friar's greed will net you a few coins? The Miller's wrath and the Monk's gluttony are on full public display and demand pardoning! The Wife of Bath regales herself in luxury, the Man-of-Law languishes in idleness, and that Prioress has envy written all over her broad forehead. And the naughty stories these Pilgrims tell each other are so full of iniquity they would make a barkeep blush! Pardoning such wickedness should be easy money, right? 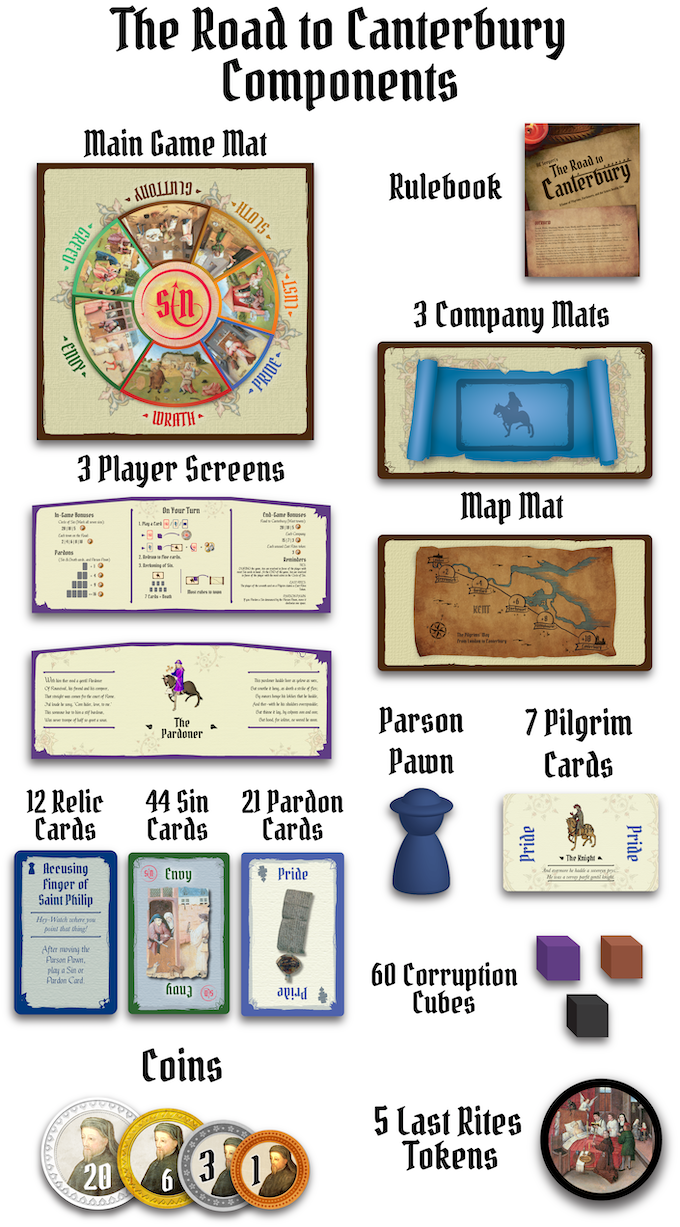 Not quite. For you to succeed as a pardoner, you'll need to do more than just sell forged pardons for quick cash. To keep your services in demand, you will actually need to lead these Pilgrims into temptation yourself! Perhaps some phony relics might help? There is also one big catch. The Seven Deadly Sins live up to their name: each sin that a Pilgrim commits brings Death one step nearer, and a dead Pilgrim pays no pardoners!

So much to forgive, so little time. Will you be able to outwit your opponents by pardoning more of these Pilgrims' sins before they die or finish their pilgrimage to Canterbury?