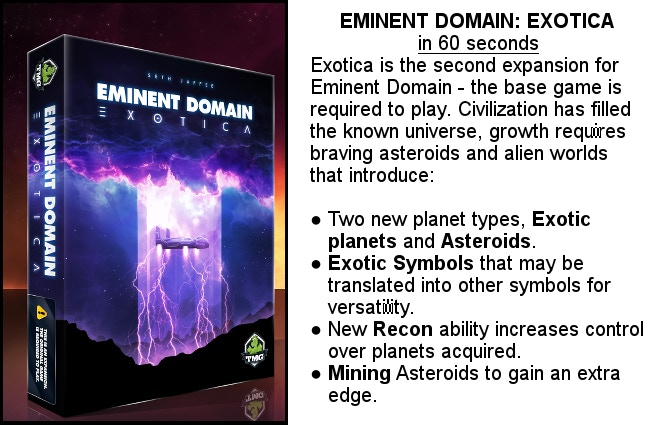 The asteroid belt marking the edge of charted space has now been made useful, no longer posing a barrier to further exploration and expansion.  Exotica adds Asteroids to the Planet deck, these can be settled and attacked as normal, or a new Mining action allows Asteroids to aid in the expansion of your empire.  Rarely do these floating hunks of rock gain you any influence, but there are still advantages to having them which we are only starting to discover.

In addition to the new uses of Asteroid usage that is being pioneered, new relations with Alien life is being developed.  Planets and Tech will start to reflect this Alien influence on our future society.  We start to see this influence with Exotic Role Symbols that by themselves are useless...but when properly translated they can yield dramatic results.

Your civilization has grown to the edge of the known universe. To expand farther you'll need to explore exotic worlds and learn their language and customs. Mine foreign asteroids for valuable crystal and befriend alien cultures in Eminent Domain: Exotica!

Exotica is an expansion to Eminent Domain and cannot be played without the base game. The designer recommends that you play the base game several times before incorporating this expansion.