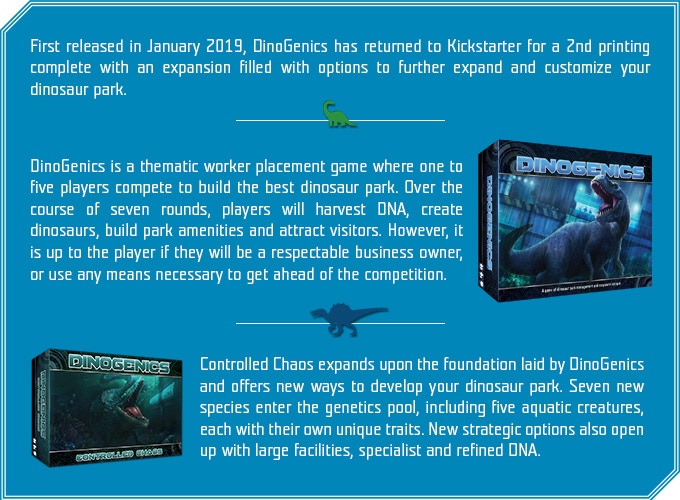 In 2056, a breakthrough in genetic reconstitution has been allowed to a small medical research institute in South American to recreate once extinct lifeforms of preserved genetic material. In hopes of attracting new benefactors through name recognition, the institute rebranded itself as DinoGenics IOM.

Industry leaders from around the world flocked to the nation in hopes of building the first successful dinosaur park. Unfortunately, the early days of the DinoGenics collaboration proved unfruitful. Tourists did not want to be true to life dinosaurs; they wanted the great beasts and monsters that had wowed cinemas and popular culture for generations. With the promise of ever-increasing revenue, DinoGenics has given the world a new lease of life.

DinoGenics is a competitive, highly thematic game for one to five players, in which each player attempts to build their own successful dinosaur park.

During a game of DinoGenics, players play the roles of multi-billion dollar corporations competing to build the most successful dinosaur park. Each player owns a private island and takes turns deploying workers where they collect resources to enhance their individual parks. At the end of seven rounds, the park with the most victory points is deemed the winner.

Each player has a personal park where they will place dinosaurs, fences, and park facilities. As the rounds of the game play, players will have the freedom to build their own as they see fit. Each player will need to develop their own strategy by developing each other.

If all else fails, players can make an attempt at using traditional methods. Growing mutant dinosaurs is a viable shortcut on the road to a successful dinosaur park. Whereas, mutants still bring in victory points and if able correctly,

Of course, you can start the path of loosened ethics, you can be tempted by darker options. Manipulation Cards offer powerful one-time use of the world of scandals ... or the ire of your opponents.

Ten years have passed since dinosaurs were re-introduced to the world. While the early years of park expansion proved fruitful, the market grew rapidly oversaturated and public interest waned.

Controlled Chaos opens the door for new combos and park types that reward playing creatively. Double wide facilities offer bonuses to the game of the game.

For example, the above is equipped with an arcade that generates points for non-paired visitors. Throughout the game that might happen on its own, but why do you take advantage of this?

Both the Mosasaur and the Spinosaurus have dinosaur eating tendencies. While this might be a deterrent in the early game, you could always start building food from the desirable dinosaurs.

New facilities like the Aquarium Hub. The therizinosaurus shown here also functions as an upgradeable dinosaur. While respectable in his own right, if you give him space to roam, he will easily contest T-Rex in pure point value.

Controlled Chaos also introduces a new resource type into the Refined DNA form. Players can now pay IntelliGen Designs to refine a DNA card into a Refined DNA, a resource capable of filling part of the genetic recipe for any dinosaur species.

DinoGenics is a competitive game for two to five players, in which each player attempts to build and run their own successful dinosaur park. Each player is the head of their own corporation with access to their own private island resort. Each season, players assign agents to the mainland to compete over DNA and other limited resources. Once collected, players can build fences, various park facilities and populate their parks with dinosaurs. Parks with the most prestigious dinosaurs will attract the most visitors. But beware; if dinosaurs are neglected or improperly penned, they will attempt to escape and spread havoc through the entire park. Use all the tools at your disposal; DNA splice mutant dinosaurs, exploit the Black Market or just try to run an honest park, the choices are yours. Do you have what it takes to lead your corporation to victory?