Board Game Geek Avg Player Rating: 7.83
Players: 1 to 4
Published: 2018
Content Notes: Kickstarter Edition "Old One Slayer" Pledge for AuZtralia the board game. Includes core game and all unlocked stretch goals. Please note: unless otherwise stated paid add ons from the Kickstarter Campaign are not included. All games are in English. 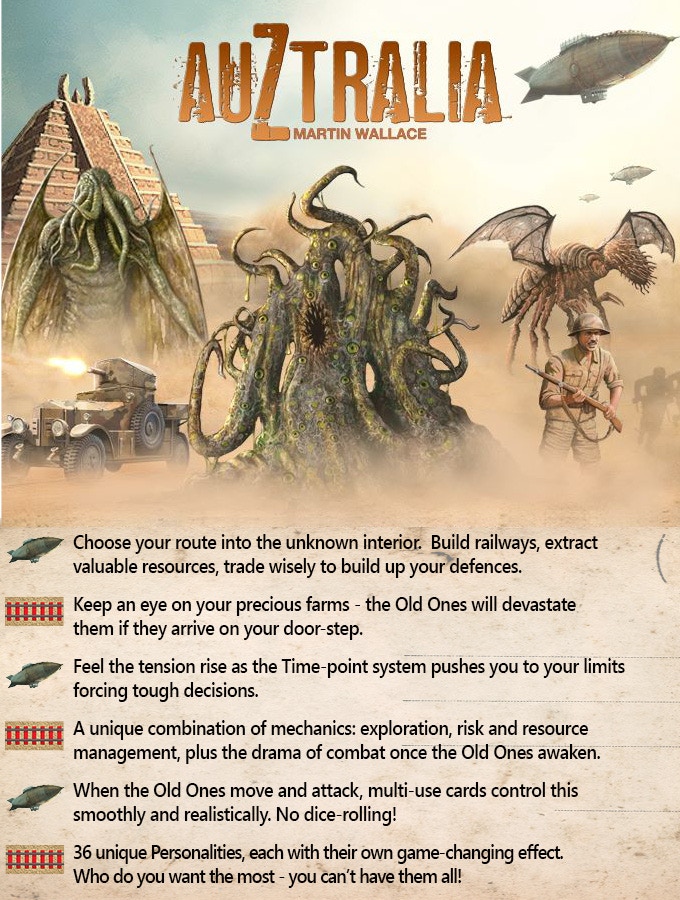 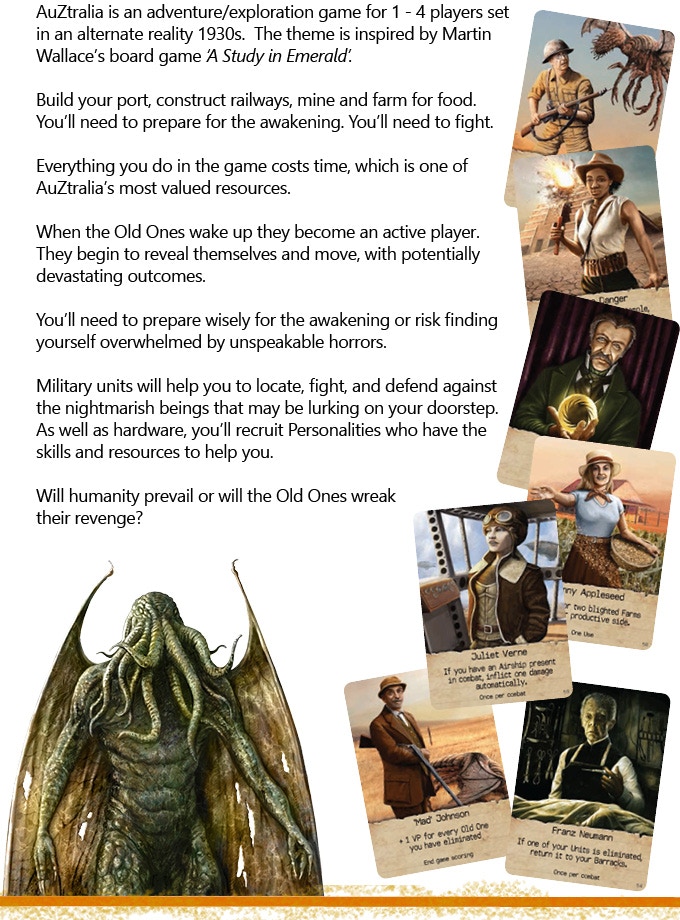 Ever since 1180, for seven long centuries, the Old Ones held full sway over the riches of the Earth and the affairs of humankind. All that changed in 1888. For in that momentous year, Sherlock Holmes and a clandestine fraternity of intrepid Victorian heroes succeeded in vanquishing these monstrous tyrants and driving them from their lands. Humanity had triumphed, but the countries of Europe and America were in a terrible state. The land was poisoned and food shortages were a constant scourge.

Other parts of the planet had not yet been explored as the Old Ones had enforced a draconic ban on exploration. Humanity, enjoying its new-found freedom, sent ships out to explore the world. A vast new continent was discovered on the far side of the world. At first called Terra Australis, it quickly became known as Australia. Brave prospectors and surveyors came to explore the new continent. They were followed by pioneers and settlers who constructed ports and built railways into the vast interior, developing farms and shipping the produce back to the hungry masses they had left behind. Untold riches in coal, iron and gold were discovered in the hinterland — but that was not all that awaited the pioneers...

There was a reason why a ban existed on exploring this part of the world. Unbeknownst to all, hidden in the outback of the land, the Old Ones had created a secret base. Following their defeat the surviving Old Ones and some of their loyal human allies made their way to their holdfasts in the arid plains beyond the Great Dividing Range. As the colonists spread, so the Old Ones began to stir, hell-bent on driving these irksome intruders back into the sea. Terrible creatures bred by the Old Ones started to move across the land, destroying everyone they encountered, blighting everything in their path.

Faced with this horror, the pioneers pinned their hopes on the one advantage they had: the power of modern military technology, which was now so much more advanced than in 1888 when mankind was last called upon to face against the Old Ones.

Inspired by Martin Wallace's A Study in Emerald, AuZtralia is an economic/adventure game set in an alternate reality 1930s in which Australia is waiting to be explored. As well as riches from the land, darkness and insanity lies in the outback. The game meshes themes of exploration, adventure, and economy (farming and mining), with battles against fantastical Old One creatures who act as an in-game player. It also boasts a randomized board set-up, an innovative combat mechanism, and a surprisingly tense solo play mode.

We're glad to back campaigns to bring you games like AuZtralia Kickstarter Game to buy online at TheGameSteward. We will use a hefty percentage of every dollar you spend on AuZtralia towards backing fantastic new games on Kickstarter! Just a reminder, if you have purchase questions on AuZtralia (Kickstarter Special Edition) game, how to buy online at The Game Steward or just need a game advice, please contact us at The Game Steward.
Share Share on Facebook Tweet Tweet on Twitter Pin it Pin on Pinterest