Ding & Dent Description:  One or more corners of the game box lid are dinged.  The ding(s) are visible but cosmetic only.

The deluxe edition of Coloma includes content not found in the retail edition.

Besides the base game components and retail edition stretch goals, the Deluxe Edition of Coloma includes 40 Chips, 30 custom Gold Nuggets, 5 custom Score Markers, 1 custom Round Marker, 1 Metal First Player Marker and all of the "Deluxe Only/Kickstarter Exclusive" Stretch Goals that were unlocked which included 6 new characters each with a unique ability not found on characters from the base game!

The Deluxe Edition is for Kickstarter backers only and will not be available in retail (except the retail stores that backed the Kickstarter). However, it will be available in limited supply at conventions, through contests, online at the BGG promo store, and directly from the publisher's website.

NOTE: Besides the base game components and retail edition stretch goals, the Deluxe Edition of Coloma includes 40 Chips, 30 custom Gold Nuggets, 5 custom Score Markers, 1 custom Round Marker, 1 Metal First Player Marker and all of the "Deluxe Only/Kickstarter Exclusive" Stretch Goals that will be unlocked.

The custom components in the Deluxe Edition replace the standard components from the Retail Edition.

The Deluxe Edition is for Kickstarter backers only and will not be available in retail (except the retail stores that back this Kickstarter). However, it will be available in limited supply at conventions, through contests, online at the BGG promo store, and directly from our website.

NOTE: This is a draft version of the rulebook and the rules are subject to change.

The game is completely language independent. We will have translated rulebooks available on our website before the game starts with delivery. German, French, Italian, Spanish, Dutch… 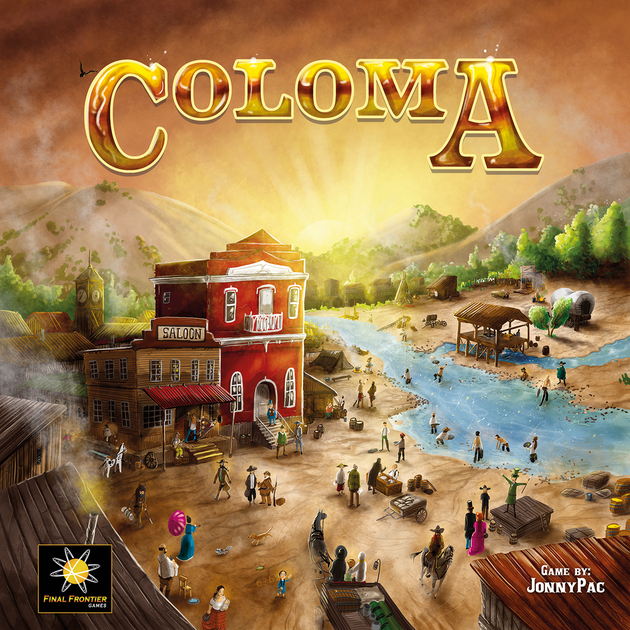 Coloma is the town where an unexpected event happened that shaped history of the Western Frontier. In the winter of 1848 a man building a sawmill on the South Fork of the American River spotted some bright nuggets in the tailrace waters below. Sure enough, it was gold! Though he tried to keep his discovery a secret, word spread quickly and it triggered the California Gold Rush of ‘49.

Thousands of people arrived from far and wide, making Coloma one of the fastest growing boomtowns in the country. Claims were staked, camps and makeshift homes were built, and hotels and saloons sprung up almost overnight. Everyone wanted their cut of the land’s wealth. For many it was Coloma or Bust!

In the game of Coloma, you are a pioneer who has recently traveled out West to strike it rich and make a name for yourself. You will prospect for gold and use your windfalls to recruit workers, rustle up horses, and establish businesses. You will also get opportunities to explore the surrounding riverways and frontier lands. But alas! You are not alone—every other pioneer seems to have gotten the same idea! Therefore, it will take extra cunning tactics on your part to not go Bust with the rest of them…

At the beginning of each chapter, you and the other players will simultaneously select an action to perform on the board. Once your selections are revealed, you must check if a majority of players chose the same action. If so, it is a Bust—which disables the Boom bonus that would be included otherwise. Then the players take turns performing actions, such as gaining resources, moving wagons on the map, building bridges and businesses, and placing camps and gunmen. After that, a section of the board is rotated—slightly changing the layout of the actions for the upcoming chapter.

When the rotating section hits high noon, the round ends with a bang: a shootout against an ever-growing number of outlaws! If you and the other players can outnumber the outlaws with your combined gunmen, you will get your fair share of the rewards. But if not, the rewards drop, and some of the gunmen will go to the graveyard... The game ends after the third shootout, and the player with the most points wins!

Coloma is a fast moving game with many paths to victory. It offers unique twists on simultaneous action selection, resource management, and engine-building. The town cards in your tableau allow you to play more efficiently, gain extra actions, and bend the rules to your advantage. With these cards and the bridge tiles (which add points based on what you achieve), you can create the perfect combination for your strategy and play style.